Police and other government agencies have launched an investigation into the killings, Butt said. Wherever you look, people are preparing to leave. The number of killings has recently increased, with four separate attacks in April alone.

Over time, the government tried to protect their main communities in Quetta, the capital of the restive Balochistan province, by putting walls around their neighborhoods guarded at the entrance by Frontier Constabulary, a paramilitary force.

Their forensic analysis revealed that the same weapon was also used in the Liaquatabad killing. The early migrants who came and settled are known as Muhajirs, something which was resented by a portion of the province's native Sindhi people and radical Sindhi nationalists. 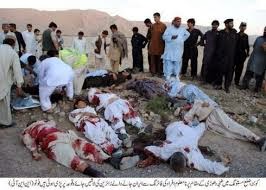 But privately, many Sikhs said this was the work of Taliban and other militants who have routinely targeted and killed hundreds of other religious minorities across the country. Members of the community have long complained that security restrictions have cut them off from the rest of the city, not allowing them to effectively manage businesses or send their children to school.

If they do, to conduct business or pursue their education, they risk death. With the latest wave of violence, and the security measures that have followed, Christians say they fear they will soon be just as restricted as the city's Hazara.

However, they failed to recover the murder weapon from them. According to Khalid, Taliban imposed jizya, a tax levied on non-Muslims living in a Muslim state, in several parts of the tribal areas when they took over after Sunni militant groups have taken responsibility for most of those incidents.

Haider, a year-old lawyer, led the protest in the provincial capital, which was sparked by the latest attack against the community - the killing of two men in an electronics shop on Friday. Three prominent Sikhs interviewed, who requested not to be named for fear of reprisal, said they had been visited by intelligence and police officials in Peshawar and instructed not to talk about the recent killings, particularly to the media, or about extortion and kidnappings for ransom that the community has had to deal with quietly.