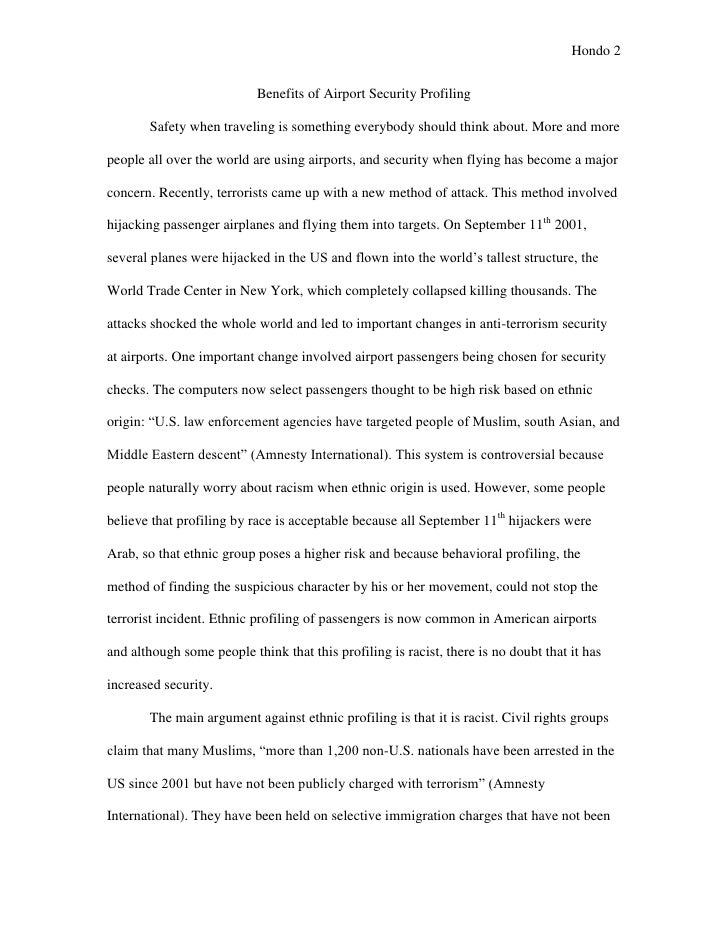 Everyone passing through security at an airport is getting on an airplane. Since the September 11th attacks, the Transportation Security Administration, also known as the TSA, initiated their plan to ensure the safety of nearly 2 million air passengers at approximately airports nationwide.

Just how deep a recruiting pool could this be among people born as non-Muslims? But I want to point out that there might be more to it than the question of efficiency. The question I'm addressing is whether this system makes any sense. Efficiency allows for more eyes on the problem -- another person watching the scanner images, another person able to study the behavior of a suspicious person.

I think you overestimate the ability of jihadists to recruit people who do not fit the profile, and you seriously underestimate the talent that neurologically intact observers not to mention trained screeners, like those who work for El Al have for spotting high-risk individuals.

But when they revised the rule to require everyone to take their shoes off, checkpoint throughput increased. This essay previously appeared on Forbes.

That's what matters, not whether or not there's a causal arrow or which direction it points. They can crash the planes, for heaven's sake. You've proposed a correlation between being Muslim and being a terrorist. Call it profiling, call it anti-profiling. They are members of al-Qaeda? Charlotte airport witnessed approximately Are these complaints justified or does security outweigh such concerns? Or something more general than airports? Everyone passing through security at an airport is getting on an airplane.

It is surely high. Once again, I would not put you or myself in this category, but many people one sees at the airport would fall into it.

Your system has a secondary benefit as well: reduced inconvenience to people who don't meet the profile. It depends on the source. To analyze your system, I first need to describe it. I do not doubt that a profile can be gamed -- and this is worth worrying about -- but I am more concerned about the risk of airport screeners obviously wasting their time. A striking resemblance to blatant racial and ethnic profiling. Three years after the Sept. As time went on, the prevealance of terrorism became an increasing issue. Before I discuss what I think is wrong with your analysis, I want to see if we share the same background assumption about the reality of suicidal terrorism in the year Imagine that a terrorist is attempting to board an airplane bound for a major city in Europe or the United States with a bomb strapped to the body of his four-year-old daughter.

For this reason, I have argued that we should profile for Muslims, or anyone who could conceivably be Muslim, at airport security. Everyone wants flying to be safe, but the question is what is each person willing to invest for their safety. Customs and Border. Explain the threat.